CPHUX is a Copenhagen based startup working to raise industry standards of UX design by uniting UX designers and businesses.

CPHUX was in its startup phase. They needed a website and an application where people could sign up and pay – and the quicker the better. Payments would be used to further develop the product.

There were a variety of things that would be needed to bring in paying members:

» A fully responsive website delivered in code. It was imperative to work for both desktop and mobile devices.

» A sign-up flow to guide the user in joining, paying, and registering as a new user.

» An HTML and Django template needed to be created in order to create new pages for the website when needed.

» A style guide needed to be created to keep all added features consistent. 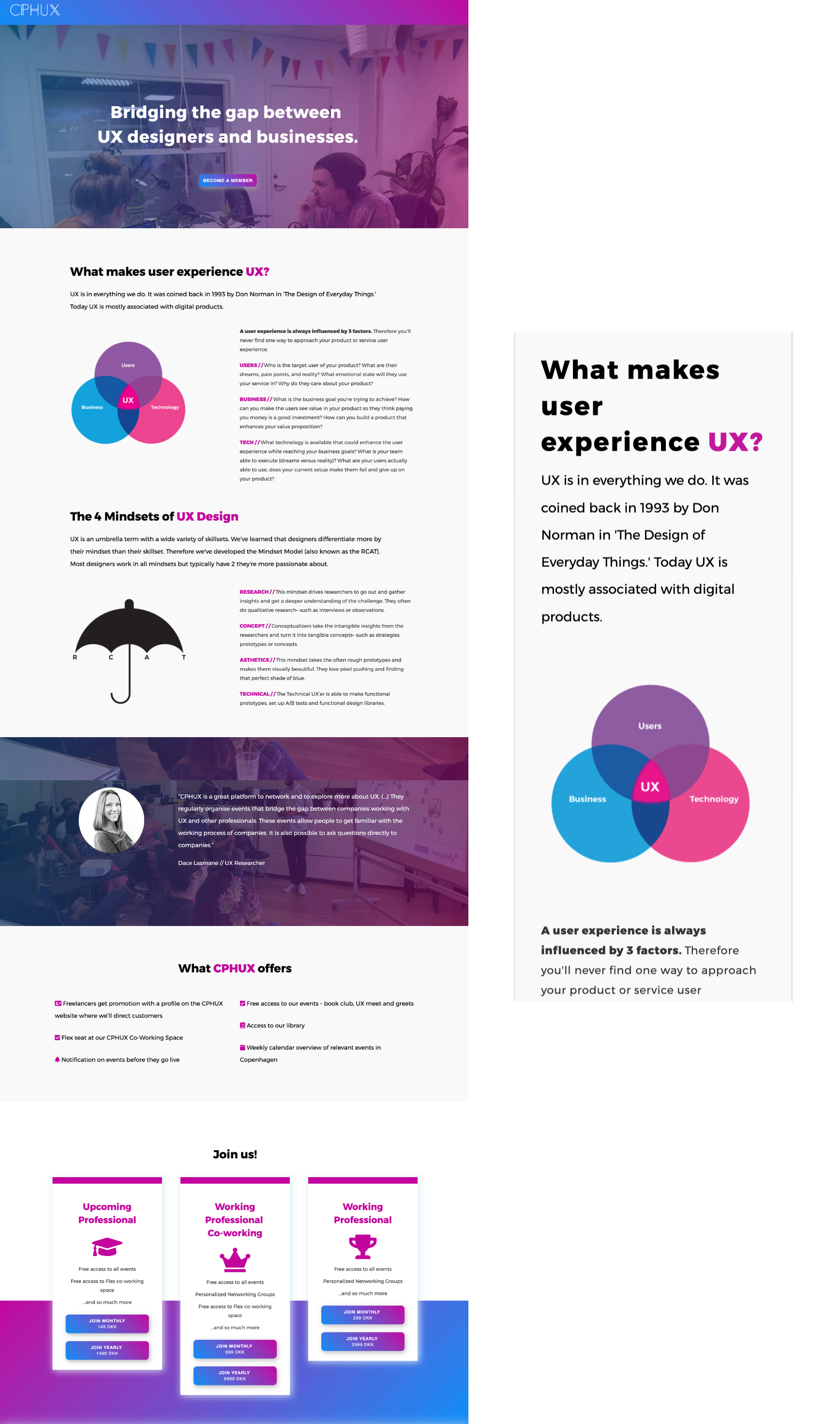 ✓ A product where a user could sign up, pay and find out about the organization

✓ Product optimized to work on mobile and desktop screens

I Wrote all HTML and CSS. Upon hand over of design from UX Designer, made design adjustments that helped make the content more concise and easy to code. Tightened designs during coding. I collaborated with the backend developer closely. We worked in Python and Django. I helped create new pages in the Django framework. Collaboration via Slack and Github.

Stages of creation
Left to right: Initial concept and layout made in Illustrator, secondly transferred to code– where more decisions were made about typography and colors, and finally how it's working on mobile.

Step 1 Dialog with backend developer who would build the backend in Django. In order to work on the frontend design/code, I setup in a Django / Python environment to run a local server for development.

Step 2 Set up the project in Git for collaboration.

Step 3 Discussion of what was most important in the first iteration.

Step 4 Started to code screens from rough designs. Made design decisions based on how to make it optimal on all types of screens. Finessing the UI at this time.

Working with gradients directly with the code
This made it easy to tryout out global styling directly on the website, and made development move quickly. In this picture for example, I could try different gradients on multiple photos without ever needing to open Photoshop.

Rationale for Design and Code Solutions

Modular Design The design was thought of in modular blocks to make it work on various screen sizes.

Mobile First Code One of the most important criteria was that it worked on a phone, as that is where their users are. Because of the short deadline, Bootstrap was used for their responsive grid "right out of the box."